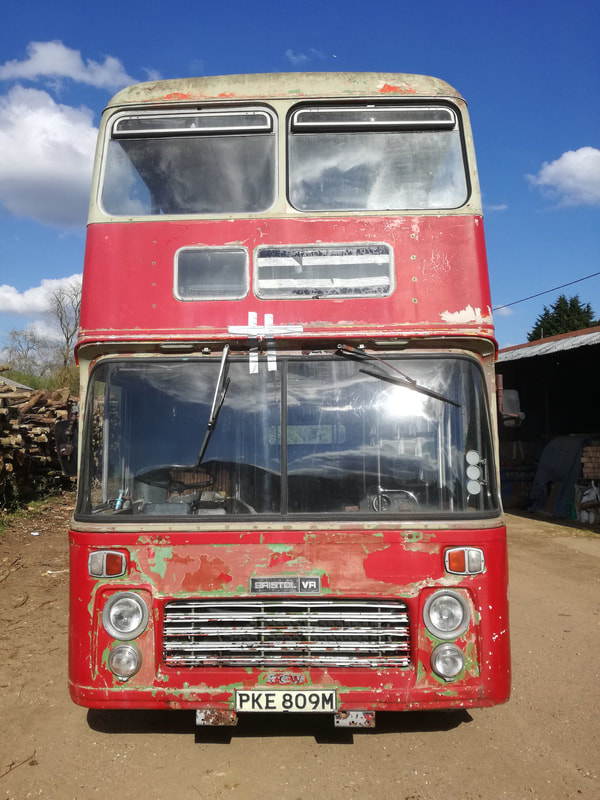 PKE807M was new in January 1974. As with her sister 5807 she was built in Bristol and first driven across the country to Lowestoft where she was fitted with a standard 74 seat body by Eastern Coach Works. Painted in National Bus Company 'Leaf Green' she took up duties with M&D lasting in service with them untill February 1989. During her time at M&D she mainly worked in the Tunbridge Wells, Tonbridge and Maidstone areas but was based at Tunbridge Wells depot.
Unlike 5807, when PKE809M was withdrawn she passed through the hands of several independent operators. She moved to Berry of Taunton in Somerset for 3 years and then in 1992 joined the well known fleet of Cedric in Wivenhoe way up in Essex. She was getting closer to home! In 1994 she moved again to another well established family business, Ford's of Althorne also in Essex. Ford's obviously liked her as she stayed here for 7 years finally being withdrawn in 2001.
In 2001 she returned back to Kent when she was sold to West Kent Buses at West Kingsdown. A little later she was sold for preservation. At last her future was secured. Over the next 14 years, 5809 sat in the yard at West Kingsdown getting greener and greener with mould. Apart from an outing to Maidstone and District 100 at Detling in 2011 she never ventured out.
In 2014 she passed back to West Kent Buses, this time for continued preservation. By this time I had owned her sister bus since 2011 and had become aware of her existence. A friend paid a visit to West Kent Buses and snapped a few pictures of her interior which was full of spare coach seats and air ducting. But under that you could see she was all there and original. I had convinced my that she must have a major mechanical defect - well why else would she had only ventured out once and not been restored... In 2014 I even got as far as enquiring about the price when I heard that West Kent were looking for a safe home for her. 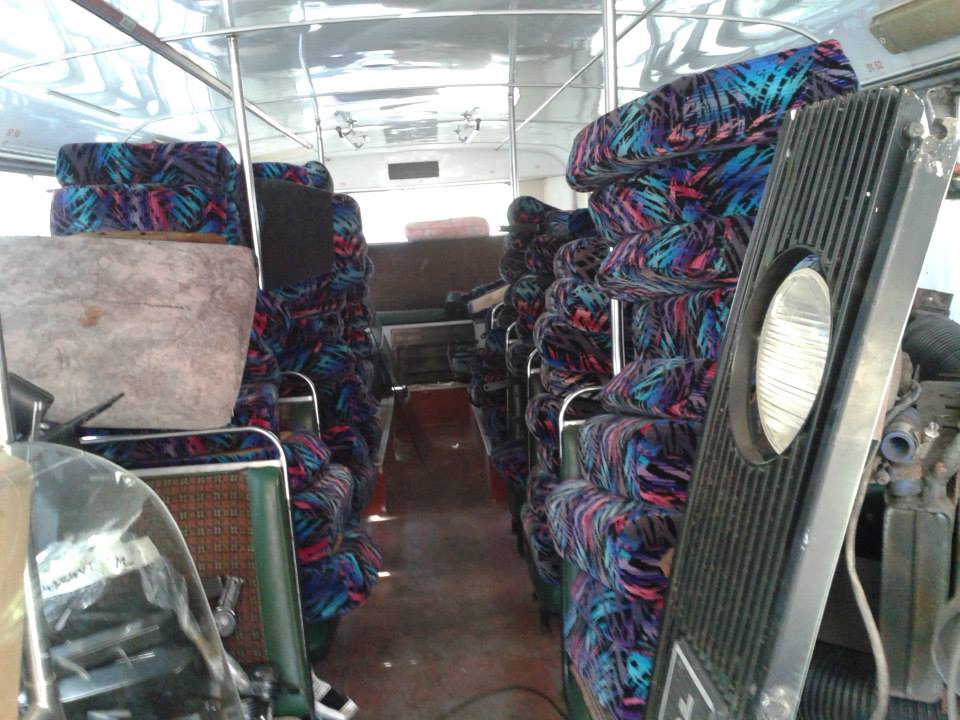 Inside was used for storage at West Kent Buses.
In September 2016 that safe home came when she was purchased by Andrew Gadsby of the Bromley Bus Preservation Group. He'd had fond memories of of similar vehicles from his childhood and decided that 5809 would make a good project. She was recovered back to their base in Kent near the M25 and the work began. Unfortunately during the move, when she had to move under her own power, her badly corroded hydraulic throttle pipes had broken leaving her only able to move on tick over speed. Andrew also discovered that the rear end was badly rotten too as well as the front destination blind box. All this being caused by water ingress through the window rubbers during her years parked outside. With much skill, Andrew set about replacing the rear parcel shelf and stripping out the rotten blind box area.
By January 2017 Andrew had also acquired an ex Derby Volvo Citybus (the beautiful E153BTO) and was working on it which meant he felt he couldn't give 5809 the attention she needed. Initially he was wondering if I knew anyone that would be interested in her. At this point I would have chewed his arm off for her but I'd only just taken on WKO137S and another vehicle might financially push me over the edge....
Within a week or so, Andrew and myself had reached an agreement which would safeguard the future of 5809 and see her in a secure home with other Bristol VRs - including her long lost sister. In March 2017 she was moved to join the rest of my buses down on the coast. Since then she had been living under cover - the first time in possibly 25 years! Her bodywork has been drying out which has allowed me to waterproof her and carry on the work started by Andrew. 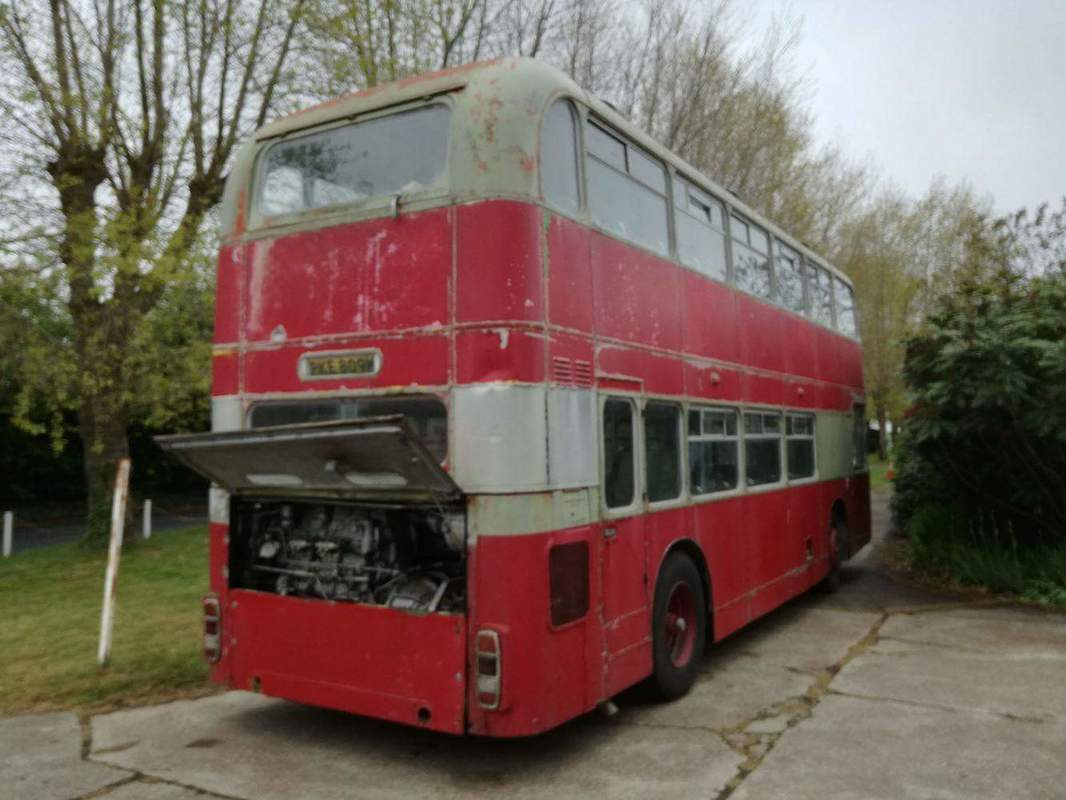 PKE809M arrives on the coast in April 2017.
5809 should return to the road in May 2018 - just over 29 years since she left Maidstone and District ownership. Long term she will return to NBC leaf green, despite the fact that I have toyed with the idea of Ford's livery and even Bygone Buses livery! To distinguish her from the other beautifully preserved VRs, she will carry a 'unibus' advert. Although she never carried this in service it will make her instantly recognisable as a Kent bus and will compliment TFN980T when she receives her later style unibus advert.
She was named Perkie by my partner Rosiy who felt having two 'PKE' registrations in the collection could end up confusing.