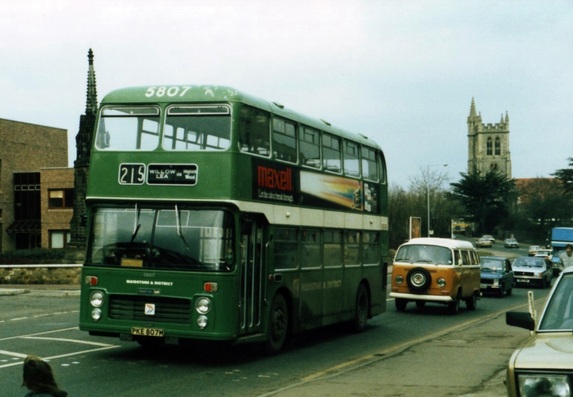 PKE807M was new in December 1973. As with 7681 she was built in Bristol and first driven across the country to Lowestoft where she was fitted with a standard 74 seat body by Eastern Coach Works.  Painted in National Bus Company 'Leaf Green' she took up duties with M&D lasting in service with them untill July 1988. During her time at M&D she mainly worked in the Tunbridge Wells, Tonbridge and Maidstone areas.
In July 1988 she was acquired by Kent Police for conversion into a mobile crime prevention unit. In this guise she visited shows and events demonstrating and selling police approved security devices for cars, shed, bikes and homes. Her first area of working was Medway, however in May 1993 she was transferred to the Canterbury Crime Prevention Panel. Here '807 took up residence at Herne Bay Garage.
Some years later....
By 2000 I had joined Stagecoach East Kent as a driver at Thanet and apart from dribbling over the Thanet and Dover based EK VRs, I'd also noticed 807 tucked inside as I'd drive my 'Kent Compass' bus past. Series 2 VRs were getting pretty rare at that point and East Kentland had only ever known series 3 buses. I added it to my wish list and drove on. 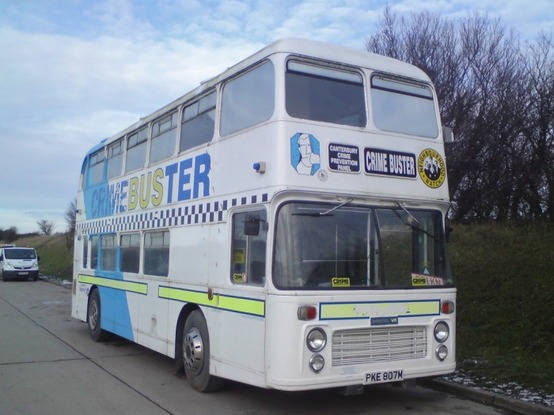 On collection from Kent Police.
The first Herne Bay Bus Rally was held in 2001 (I think) and '807 was there and open to the public. I'd taken along ex London Leyland Olympian 7122 (C122CHM) due t the lack of any VRs at Thanet and decided to have a look on board. It was full of displays on how to make your car so secure hyena's couldn't steal it and what lock is best to turn your house into a mini Fort Knox! I met the guys n board and said 'if ever you want to get rid of it....'
In October 2008 I joined Kent Top Travel driving on the Canterbury Park and Ride service. On my second day on the job I drove down Old Dover Road past the police station.....
PKE807M was peeking over the top of the cars and the security fence at me! Many happy hours stuck in Canterbury's historic traffic jams were spent looking through the fence at '807 and watching her get greener and greener. In fact during that whole period I only ever saw her go out once- and that was just to local 'do' in the High Street. The reason why would become clearer later on.
Back in November 2009 whilst washing down Park and Ride buses in the gloom, my colleague who was helping me casually asked if I knew anyone interested in an old Bristol bus. 'Does a bear pooh in the woods?' I replied exicedly. My partner Claire said if I wanted '807 she would buy it for me as a Christmas present! Despite my fears that the wrapping paper would outweigh the cost of the bus, phone numbers were exchanged and in return for a donation 5807 joined my collection on the 5th January 2010. 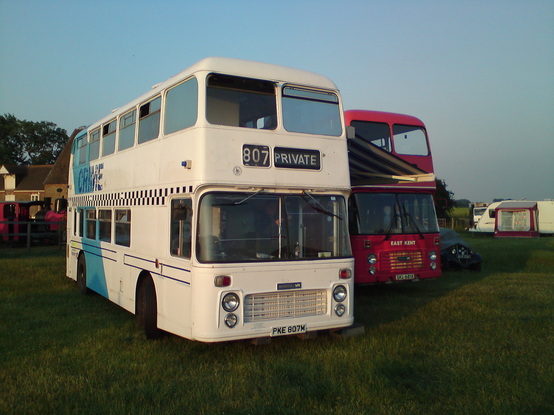 5807 at Preston Steam Rally 2010
After leaving the police station and smoking out most of Canterbury, the white smoke turned grey. Stopping in a laybay near Sandwich confirmed that '807 was not a well bunny and was burning oil -hence the smoke screen. The nearside rocker cover was blowing a small amount of oil out. This aside, and a small amount of rot on the rear parcel shelf, she is a good bus. Once DMS550 has had her work done I am hoping to have a look at '807's engine Hopefully it will just be a gasket and back on the road, fingers crossed for that smke test though.....
After speaking with Claire, we both agreed that PKE807M's conversion is really rather nice and too good just yet to rip out and replace with bus seats, so we will be enjoying her as a 'mobile home' so to speak. Restored on the outside, comfortable on the inside. 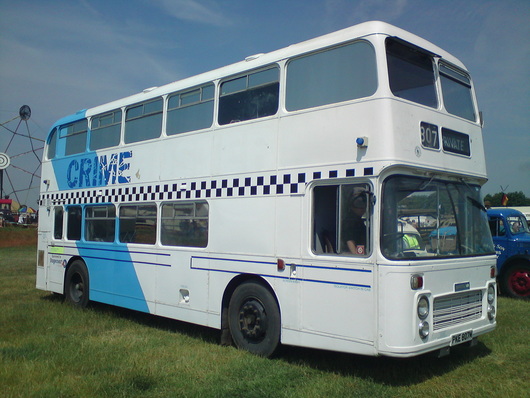 In the ring at Preston 2010
Since this page has been added, 5807 passed her MOT with flying colours and attended the 2010 Preston Steam Rally - her first event as a preserved vehicle. However, on the way back from this event she developed the annoying fault of loosing speed and power when she gets warm. Talking to a former bus mechanic friend of mine, he said this could be the fuel pump. This will be fixed soon but in the mean time 5807 has found herself acting as a mobile yard office come store shed. The idea to convert her to mobile kind of worked but moving her AND 7681 at Preston proved a logistical nightmare! 5807 is our office and we're buying a tent for next years shows! Eventually 5807 will be repaired and returned to her bus status - I'm stocking up the spares like trim that I'll need, I'm working on seat frames next. Anyone who has a copy of the Ian Allen book Bygone Kent by Glyn Kraemer-Johnson and John Bishop can find an excellent picture of 5807 on the back cover in service at Tunbridge Wells. 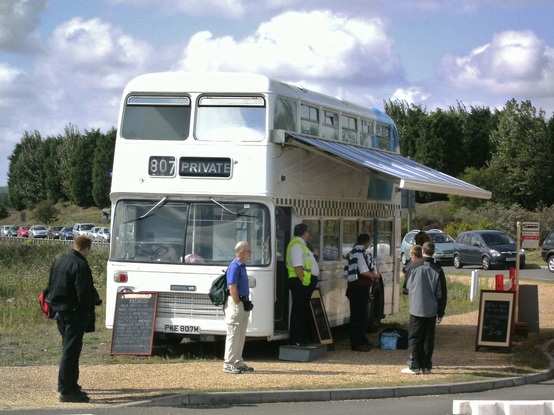 As the control bus at the 2010 Fowlmead Running Day 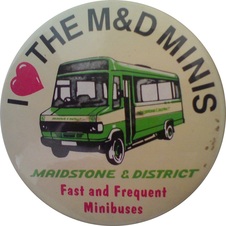