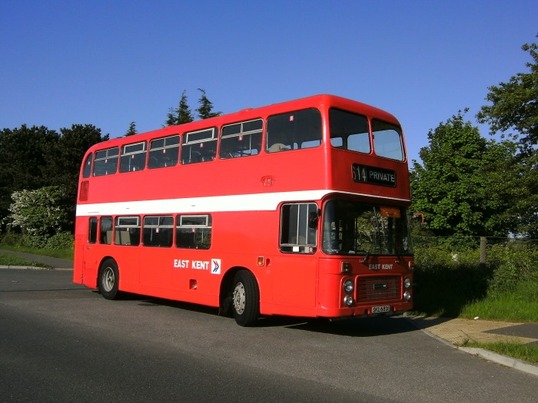 7681 was constructed at Bristol Commercial Vehicles during 1981 and driven in chassis form, in common with many others, to Lowestoft in Suffolk where she received an Eastern Coach Works 74 seat body, pretty standard to the National Bus Company. During September 1981 she was delivered to Westwood (Thanet) garage of the East Kent Road Car Company Limited where she was accepted for service. She entered service on the busy Thanet-Canterbury service corridor replacing AEC Regents. Yes, the Bristol VR's must have been popular with the enthusiasts at that time! 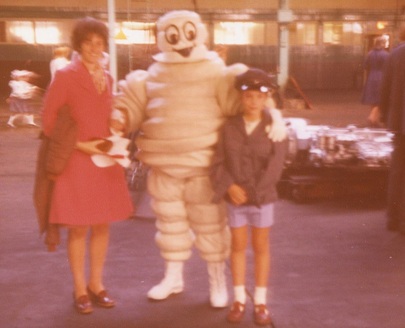 A young Jake (I'm on the right!) at Westwood Bus Garage open day in 1985.
About the same time, a young Jake had started school in the Chilton area of Ramsgate and used the 47 school bus to get back to Cliffsend. This was run by East Kent who one day around 1982 provided 7681 for the 7 year old me to go home on. I was hooked! Around the same time I used to holiday on the Isle of Wight where I noticed Bristol VR's down there- only these were green not red like our East Kent ones at home.
A good few years later I moved away, strangely enough to the Isle of Wight. Whilst there I lost touch with developments at East Kent as I focused more on Southern Vectis the local operator. I spent a lot of time riding arond on their VR's wondering how they never ran out of gears going between Shanklin and Ventnor and burning my legs on the brown plastic seats during the hot summers! I watched with horror as Bristol VR's were replaced with Volvo Olympians in a funny mushroom livery. The Bristol RELL's that had chugged around when I was a child had also gone and now they were on about getting rid of the vintage fleet of Lodekka's. Time to move! 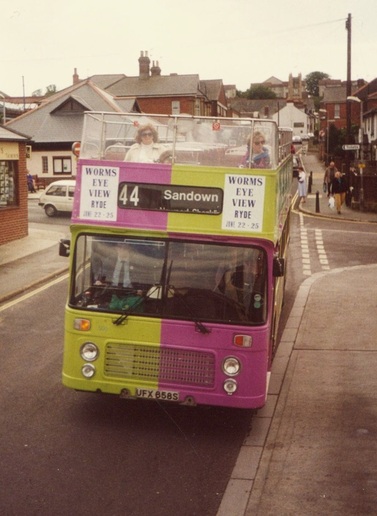 One of Southern Vectis' Bristol VR's at Shanklin Bus Station in 1994
To cut a long story short, I moved to London and took up employment on the buses. Two years after that I returned to East Kent land to work at Thanet garage and lo and behold, yes, they still had VR's in service. Ok, they were in a certain white and stripy livery but apart from that they were pretty good. Thanet had 7671/72/81/82 plus 7683 sat out back awaiting sale. Dover garage was VR heaven with lots from the XJJ-V batch in service, in fact, it seemed every Dover decker duty was covered by VR's! Time moved slowly on and ex London Scania's started arriving as VR's started leaving. 7681and 7682 seemed to always be allocated to Canterbury services during the summer of 2000. 7672 vanished one day, then coming back from Canterbury one afternoon 7682's mitre box packed up at Birchington. 7681 was MOT'd and re-entered service in September 2000 but was taken out of traffic two weeks later with a broken engine mount. 7671 was parked up out back too and although Dover's held out a little longer, at Thanet our last three buses (7671/7681/7682) were withdrawn. 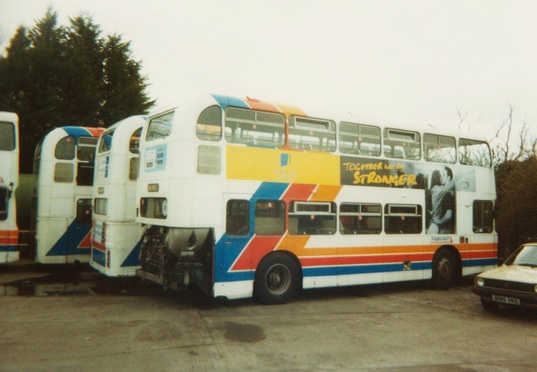 7681 and her sister buses face an uncertain future at the back of Thanet depot.
7681 was shunted into the bodyshop at Thanet and the engine and gearbox removed with a view to repair the engine mount but this was never carried out. I spoke to the Garage Manager about the buses future and she suggested I call the Stagecoach South Sales Department based at that time in Eastbourne. So after going over all the buses to check them and see which one was the best I called them, and by the end of the day I was writing a letter to them with my bid for 7681 enclosed, which despite it's engine and gearbox sitting on a trolley next to it seemed to the better prospect (7671 had about 40,000 rivits over the rear nearside wheelarch holding it together and 7682 had a spongy upper deck floor). I very nearly ended up with all 3, but my bid for 7681 was successful. 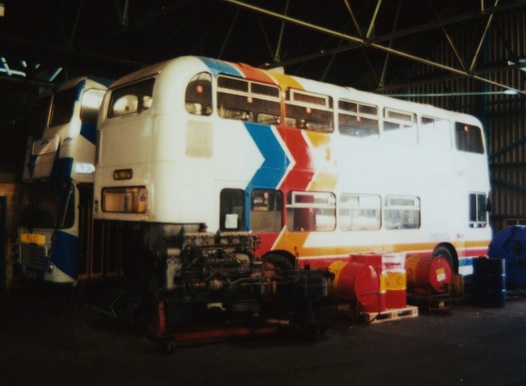 7681 back inside Thanet garage having the engine mount attended to. She shared her corner with former 7041 (MFN41R) Thanet Crimebuster and East Kent first VR.
In the early days she was kept at Westwood bus garage, however a change in policy meant that she later had to be moved to Dover Transport Museum. This was not a happy time for her as she suffered several smashed windows and was parked outside. Later she moved to East Kent Heritage Trust's Garage at Sandwich where she was in secure undercover accomodation. 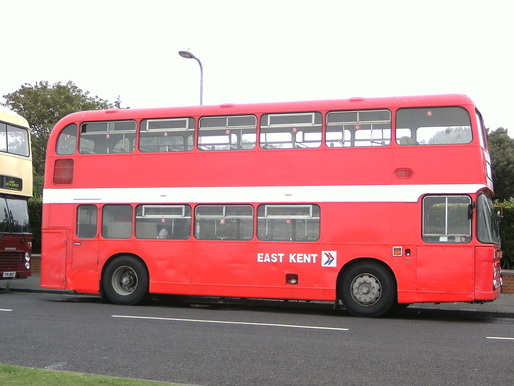 Since then I have repainted her into National Bus Company 'Poppy Red' and repaired a leaking mitre box oil seal (this took nearly a year!). Although not a perfect restoration she is a working bus with a few dents and wonky panels. The period of time she is restored to is her second repaint in 1985, she would have been in service and been less than perfect but tidy. Some minor jobs remain to do on her to finish her off such as replacing the front upstairs with the 'push out' vents and repainting the roof but for now I'm happy to enjoy her as she is on the road after such a long time 'VOR'. 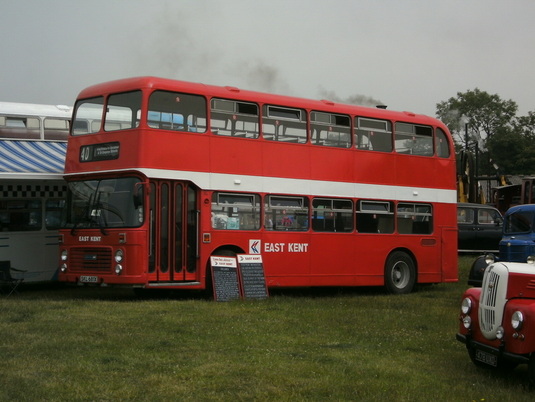 7681 at the 2010 Preston Steam Rally, despite how it may seem she isn't steam powered with a chimney at the back of the roof! 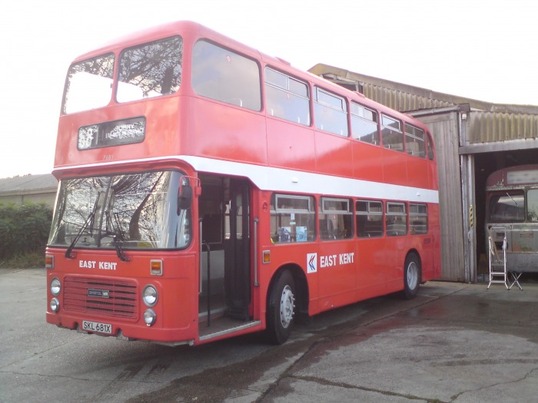 Click here for links to websites about Bristol VRT and other Bristol vehicles. 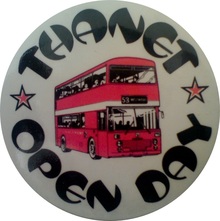