Well it's been a really busy summer with four Bristols on the road and attending various events in Kent and Sussex. With all thats been going on work on DMS550 has all but stopped. I've just about had time to tack the new panels on her front. These came from former DMS1968 via Stuart Boxall and are in a better condition than her original ones. I've still got to finish off the front step area and put in the doors. The panel work around this area is nearly all done (using recycled panels from the front of the bus!) and just needs a lick of paint. The inside is still a shed and needs cleaning and all the fittings installed. Also she needs a window replacing along with the drivers side screen and a new exhaust system too. Once all this has been done and she can move without smoking out Thanet and sounding like a bomber taking off she will be taken for a full service at a local company along with a brake test and then I can think about MOT! With PKE807M liable to be off the road until further notice, it would be good to have 550 ready for April 2011 (807's MOT date) to take her place on the showground next season. A new gallery has been added of 550 HERE. 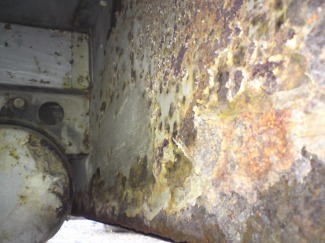 DMS2257 After a long chat with Stuart Boxall we have both decided that to repair the corrosion to 2257's lower panels would be a huge and expensive job. Similar work of other buses has run into thousands of pounds which at the moment nobody has. Also experiance with MCW bodywork shows that they can rot right up to the upper deck floor which with 2257 is another possibilty. The amount of rust and bits the fall out when you hit the side panels would suggest this. Against all this we have decided to use her for spares towards DMS550 and Martin Clitheroe's DMS1911. This is the real problem with MCW bodied buses in general, and DMS550's bodywork confirms that Park Royal do have a much better build. 550 has stood outside twice as long as 2257 and is in much better condition. Stuart confirmed this with the other Park Royal DMS' he's seen such as DMS115. The good news is Stuart has located two more B20 type DMS' but this time with Park Royal bodies and working engines. More details coming soon as I hope one if not both to join my collection soon.

DMS550 Work continues on the front platform area with the help of Tim (Mr Metal) Hannington of FotEK. The basic framework is in place for the top step and it just needs the framework for the lower step now. This has been started with the step walls being made up from check plate steel. Tim has panelled and boxed in the hole in the roof which now just needs skimming with fibreglass compound. This can't be done just yet as it's way too cold in our garage for it to set! He has also cut and fitted the panels between the front door and window. Some pictures of DMS550's restoration can be seen HERE.

DMS550 Work on 550 continues a little bit slower than planned due to the Christmas period (bah humbug!) but the front step is coming together as are the roof repairs. We have got a good friend to give a hand with the welding so hopefully in January things will really start to move on.
DMS2257 Paid her a visit a few weeks ago before the bad weather turned up. Once the engine is repaired she will need some rather serious bodywork and welding. Being MCW bodies she is a bit rotten to say the least but at the moment it doesn't look terminal. I'll be learning some welding skills over the next few months and these will certainly come in handy with 2257. Still not sure at the moment if the Iveco engine is worth repairing. The liners have gone and it now exhausts out of the filler cap! It would be nice to see another B20 Fleetline preserved out on the road.
DMS550 & DMS2257 now have their own Facebook group. Just type DMS550 into the search bar to find us! 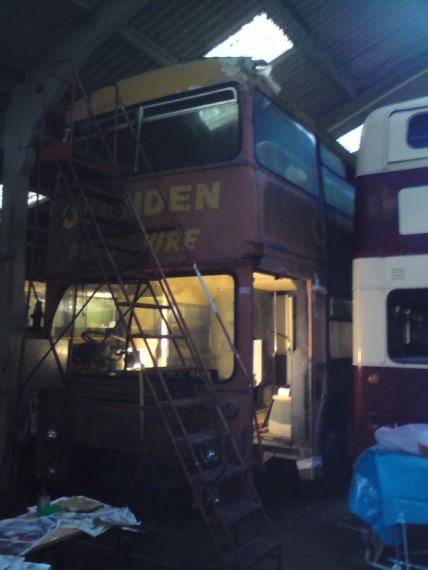 550 on arrival at Sandwich Garage 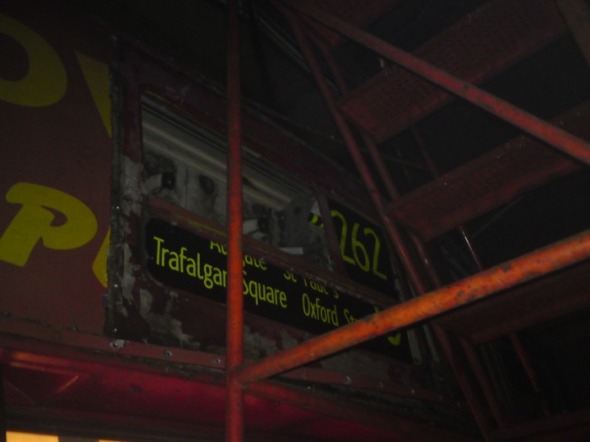 As stated elsewhere on the site DMS550 is now undercover for work to begin on her long restoration. I'm putting a date of 2012/13 on her completion as this will be her 40th birthday and it would be nice to have her fully restored for that. Maybe we can do a little tur in her to celebrate. She drove quite well considering 550 hasn't moved for nearly 4 years, although she was very smokey which with no exhaust pipe on meant that the fumes filled up the bus and I was kippered to say the least! It's good to see that all the interlocks still work too, it won't start with the dors open, when you switch it off they all close and the brake lights come on when the centre doors open. It's little things like that that give you a moral boost ahead of a big restoration. It kind of shows shes not dead but just in a deep sleep!
On a brighter note, I am in regular contact with DMS guru Stuart Boxall wh owns/part owns several of these old ladies (glad I'm not the only loony). DMS2257 (OJD257R) has passed into his ownership which after a long chat he offered to me. DMS2257 is of course a B20 re-engined with a rather sick Iveco unit. I'm hoping to pop up and see her soon, but I'm suspecting the Iveco is beyond all hope and may return her to trusty Leyland power- although it would more likely be a 0.680 and not the original turbo charged 0.690 unit. More on this later though.

With all the work on 7681 after the MOT, not a lot has been done to DMS550 lately. She should've been moved by now but 7681 has delayed the work on 7980 which is in the space 550 will take. I'm hoping she'll be undercover before Christmas so serious waterproofing and bodywork can start.

As you have no doubt read and seen in the gallery, DMS550 dropped into gear recently after major electrical work wos carried out on her. This is just the tip of the ice berg now as she has got to have the front flat tyre attended too and be moved from her current site to another more secure site - but still out doors. Once the Fowlmead Running Day is out of the way I will attend to her a bit more. Her front near side front piller and over the doors does need a lot of work as its all but metal lacework now! The flag unit is still showing the gearbox light even when she's in gear, but this could be an air fault rather than an electric one. 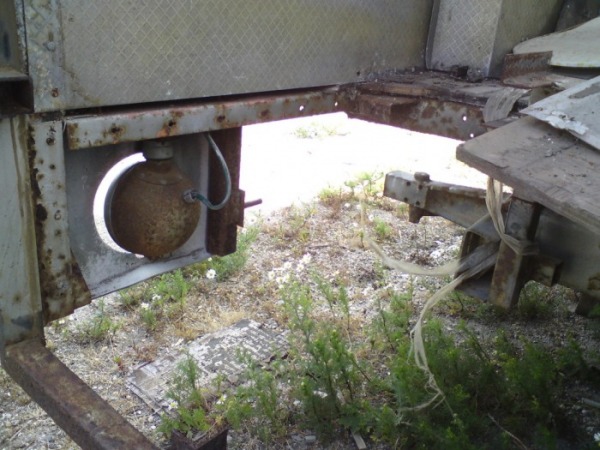 More internal work whilst the electonics are being sorted out. The framework around the front door is slowly being removed as is the rather manky carpet from the lower deck.

DMS550 is still going nowhere fast with the electrical problem so I have been working on clearing out the inside again. The good news is that on pulling up the carpet, the Treadmaster underneath is servicable with a bit of work.

Good news indeed! Someone I know had started a bus and coach restoration business in Ramsgate, His line of work was in rail replacement buses and also open top tours with City Sightseeing but now he has decided to start an Ensign style operation in Kent. He had an ex GMPTE Northern Counties Atlantean up for sale but was willing to break it for spares. This has netted me the doors, handrails, headlights, wheels/tyres and brakes for 550, all for a reasonable price too. The wiring loom is 90% done now. There are just a few (4) wires of the same colour causing confusion. Think it will have to be a case of try them and see. Once this is all done the flat offside front tyre will be swapped for a new one and the doors installed along with the front platform rebuilt. I have price this up already and for the parts to build the front step I'm looking at about £115. Angle iron from B&Q seems the cheepest option.

Work has continued on 550's wiring loom which really is a time consuming and tedious job. Also all the old Plaxton seats have been put back inside for the time being until I take them to the tip. Looking at her it would appear very little has happened but once the wiring is done that will change. Basically when she experianced a small fire some years back it burned through the wiring loom in where the lower saloon rear seat would go. The fire was caused by a blowing exhaust pipe setting fire to the wood flooring. The burnt section of loom being (I hope ) the reason why she won't drop into gear. After getting quoated £300 for the work to be done and speaking with FotEK's Tony Hammond I decided to have a go and do it myself. Tony had rewired part of an AEC Regent and has given me guidance over issues with electrics before.